How much of the state needs to comply with SB 1383?
(Hint: The answer may surprise you) 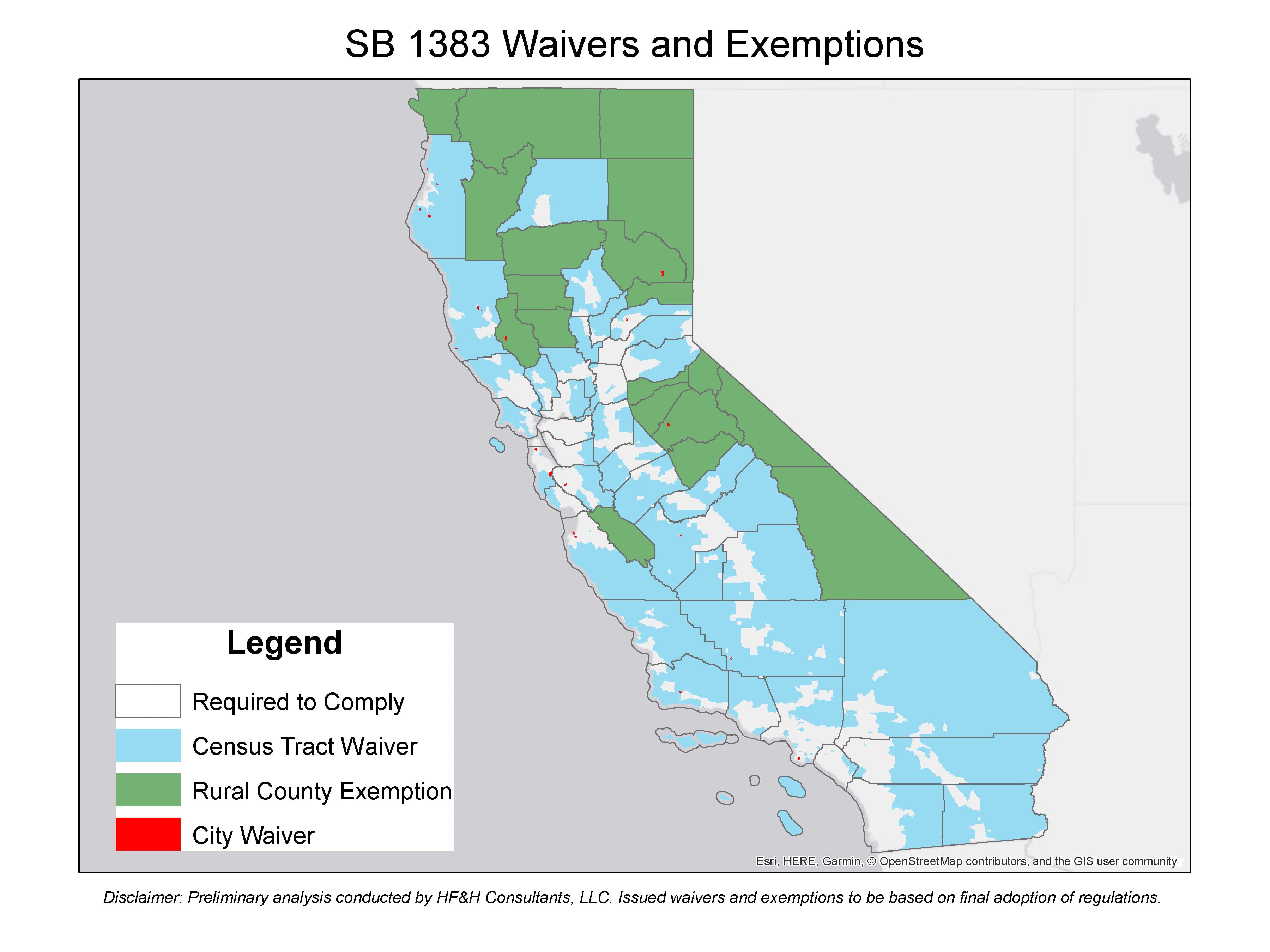 SB 1383 allows counties and cities with low-population areas to apply for one of three types of waivers/exemptions. CalRecycle has included these waivers/exemptions recognizing the unusually high cost of providing organics recovery programs to residents and businesses in rural or remote areas. The map above illustrates regions of the state that may qualify for such waivers or exemptions. At first glance, it may look like most of the state may qualify for an SB 1383 exemption or waiver but, in fact, our preliminary analysis indicates that 96% of the state’s population must comply with the current draft of SB 1383 (released in May 2018).

Each low-population exemption and waiver is described below.

Counties can apply for low-population waivers for census tracts in unincorporated portions of county area. Qualifying census tracts must have a population density of less than 50 people per square mile[1]. Mirroring CalRecycle’s preliminary analysis, we used data from the 2010 U.S. Census[2] to determine which census tracts fall into this category. We discovered that over 300 census tracts do, accounting for 2% of the state population. But it is important to note that the number of census tracts that fall under this waiver may decrease when 2020 census data is used for this analysis, due to population increases. Census tract waivers are valid for up to two years, at which point a county can reapply for another waiver if the population densities still meet the mandatory threshold.

Counties that qualify as a rural county may apply for an exemption. This type of exemption is common in California solid waste regulations due to the unusually high cost of providing service to generators in these areas. For a county to be considered a rural jurisdiction, it must have a population of less than 70,000 people. Based on 2010 U.S. Census data, 19 counties qualify for this exemption.  The regulations do not explicitly state whether cities located in rural counties are also covered under the rural exemption; however, similar rural exemptions issued by CalRecycle have extended these rural exemptions to cities located within such rural counties. Rural exemptions are valid until January 1, 2025, or until 5 years after CalRecycle determines that the state’s 50% organics reduction goal (target year 2020) has not been met, whichever comes later.

Lastly, cities can acquire a low-population waiver if they meet two criteria: 1) they must have disposed of less than 5,000 tons in 2014 (based on the State Disposal Reporting System); and, 2) they must have had a population of less than 5,000 people (based on U.S. Census data). For our preliminary analysis, we used population data from 2014 to determine which cities qualify for such waivers. We determined that 20 cities, listed below, may qualify for a low-population waiver; 3 of these cities fall into a county that qualifies for a rural exemption. Waivers issued to cities are valid for up to two years at which point a city must reapply for another waiver. It will be approved only if both disposal and population thresholds are met.