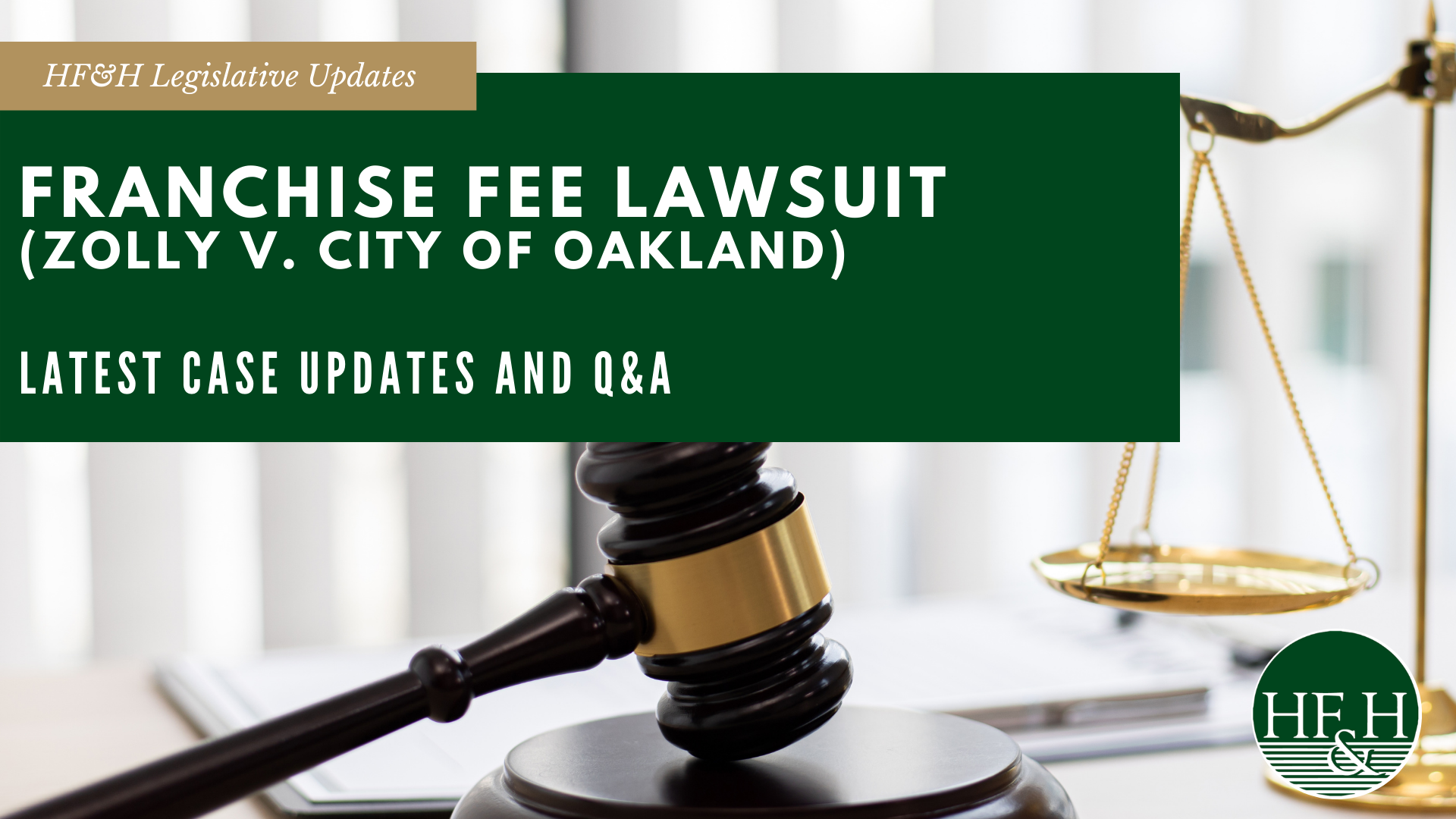 An important case regarding solid waste franchise fees, Zolly v. the City of Oakland, was argued in the California Supreme Court on Tuesday May 24, 2022. We sat down with Rob Hilton, HF&H President, to learn more about the case and how it may impact local jurisdictions.

What is the “Zolly v. City of Oakland” case and why should we be paying attention to the ruling?

Rob Hilton: Zolly v. City of Oakland [“Zolly”] presents a challenge to the City’s ability to collect franchise fees from its franchised solid waste collection services provider(s). Oakland prevailed in the superior court, but lost on appeal, largely based on the ruling of the California Supreme Court [“Court”] in Jacks v. City of Santa Barbara. The Zolly case was taken up by the California Supreme Court given the potential for broad precedent and potential conflict with an appellate decision in the Bay Area Toll Authority case. The outcome of this case should provide local governments throughout the state with guidance on whether their solid waste franchise fees are taxes and how to assess the value of franchise fees.

What were the takeaways from the May 24 hearing? Did it give us any indication of what is coming next?

Rob Hilton: The California Supreme Court heard oral arguments and had an exchange with the litigants on May 24, but their decision could take up to 90 days. The Court is notoriously hard to read, and justices even have a practice of asking contrary questions to their own opinions to challenge the litigants. That said, it seems that both litigants and the Court believe that franchise fees are subject to exemption 4 under Proposition 26 [Cal. Const. XIIIC §1(e)(4)] related to the sale or rental of governmental assets. The franchise itself is an asset of the local government, which has value and can be conveyed. The parties seem to differ on whether there is any limitation on that value or any obligation of the local government to determine the value of the franchise prior to establishing the amount of any such fee. In addition, Zolly’s attorney claims that the amount of the fee in Oakland’s particular case may not have been established in a bona fide, competitive, market-based process because of alleged political influence.

How will this decision impact local jurisdictions?

Rob Hilton: It is possible that the decision of the Court may be relatively narrowly applied to the unique facts of Oakland’s situation or may have much broader implications for all local governments related to Proposition 26. The fact that the Court took up the case, in part, to deal with appellate court differences on Zolly and Bay Area Toll Authority, indicates that they may rule more broadly. We hope that the Court will rule with Oakland and categorically defend the rights of local governments to establish franchise fees consistent with exemption 4 in Proposition 26. If so, most local governments can rest assured that their franchise fee revenues are safe. Alternatively, the Court may rule with Zolly and find that any amount of a franchise fee that exceeds the value of the franchise represents a tax subject to a public vote. If that is the case, we hope that the Court will provide guidance on how to establish value.

Is there anything jurisdictions should be thinking about or preparing for?

Rob Hilton: At this time, it is best to await the decision from the Court before making any changes to franchise agreements or fees. Once the opinion is rendered, local governments with solid waste franchise fees should consult with legal counsel about the particulars of their situation to determine how best to proceed with modifications to their franchise fees. HF&H has followed this developing case closely and will be prepared to support local governments in calculating and negotiating the changes required.

What are the next steps in the case and when should we be expecting a decision?

Rob Hilton: The California Supreme Court has 90 days from the date of the oral arguments to render a decision. So, by August 22, 2022 we should have a published decision.

Note: HF&H updates are for informational purposes only, and are not intended as legal advice. Seek legal counsel for further information.

HF&H is here to help!

To subscribe to our Legislative Updates, send an email to Kim Erwin at kerwin@hfh-consultants.com with the subject “Subscribe”.