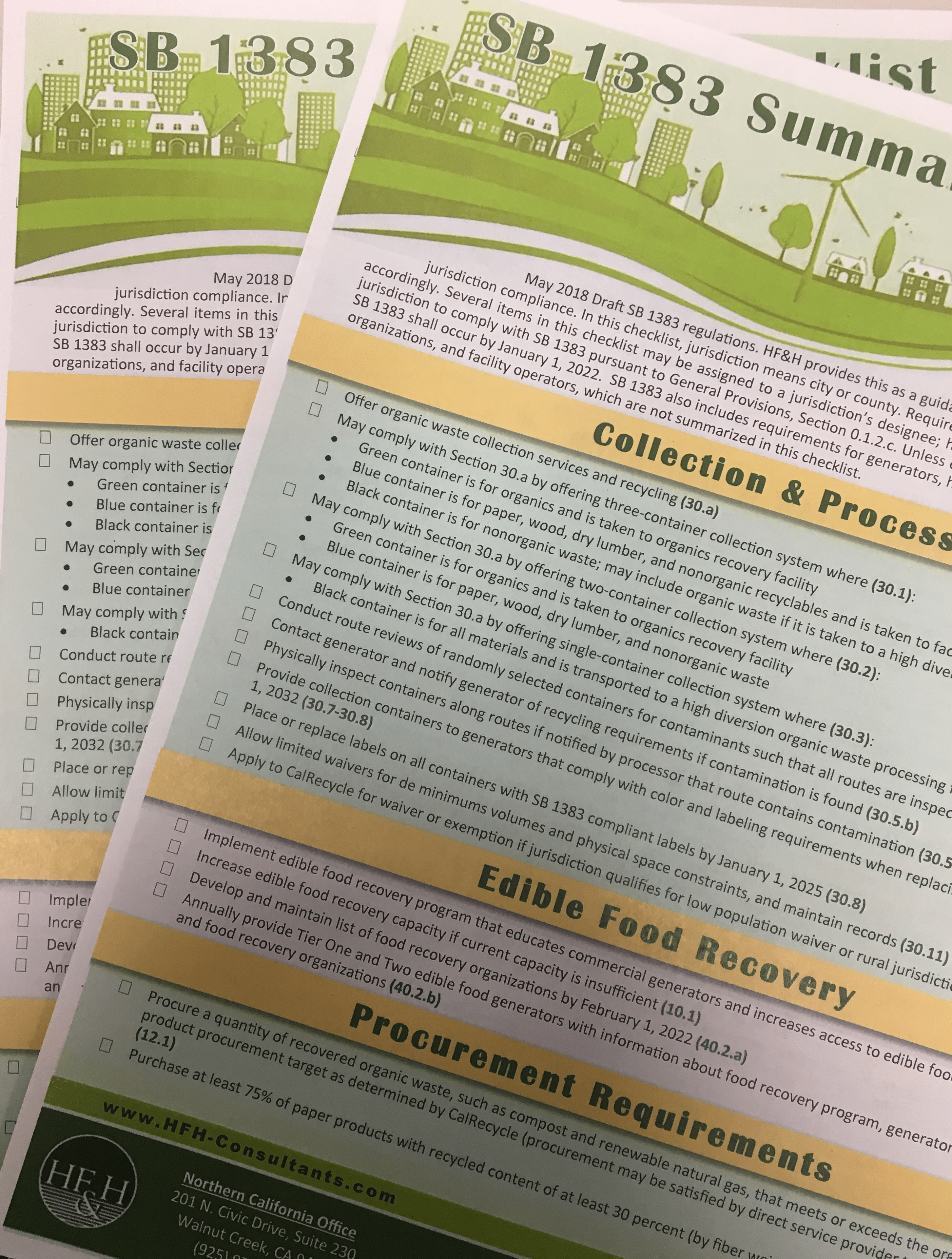 Checkout a quick one-minute recap of our Oakland Summit…

What a summit! Questions were answered, connections were made, and, in Oakland, there was lots of confetti. It just so happened that the Warriors’ championship parade fell on the same day as our NorCal SB 1383 Summit. Roughly a million people poured into the streets – but that didn’t stop dozens of local agencies from attending our Oakland Summit. Dozens more attended the SoCal Summit in Long Beach.

Next, members of the HF&H team took turns diving into the details of SB 1383, beginning with collection requirements. The legislation requires jurisdictions to provide one of three collection options to generators, as described in the table below. It is important to note that SB 1383 relies on minimum program standards rather than jurisdiction-specific mandates required under AB 939.

SB 1383 Collection Options to Fit All

As you can imagine, the organics infrastructure needed to support SB 1383 is substantial. HF&H president Rob Hilton estimates that SB 1383 will generate 17.2 million tons of additional organics waste, which will require roughly 245 NEW processing facilities (at 70,000 TPY average).  Each of those facilities is estimated to cost anywhere from $6M to $100M, and may take 3 to 5 years from conception to operation.

Other pieces of SB 1383 covered at the summit included enforcement and recordkeeping. Virtually all sections of the new draft regulations include some type of recordkeeping requirement. In addition to having to keep records readily available to CalRecycle in an “Implementation Record,” jurisdictions are also required to submit an initial compliance report before they begin submitting annual reports to CalRecycle. Failure to maintain these records and report to CalRecycle has a minimum penalty of $500 per day. And that’s just the tip of the enforcement iceberg.

The draft regulations list more than 80 violations that can be handed down to jurisdictions, generators, property and business owners, edible food generators, food recovery organizations, and haulers. Most of the enforcement authority lies with CalRecycle, but jurisdictions are also expected to enforce SB 1383 requirements on generators. Overall, fines range from $50 per violation to $10,000 per day. While the legislation has teeth, note that there is a compliance process before fines are issued.

HF&H covered much more at the summit, including tips for implementation, funding strategies, and waivers and exemptions. We also distributed an SB 1383 checklist specifically for jurisdictions. If you would like a copy, give us a call! If you’d like to be subscribed to HF&H’s email list in order to receive our legislative updates and notification of future workshops, please send an email to Kim Erwin at kim@hfh-consultants.com with the subject “Subscribe”. Please note that these items are available to California local government agencies only.